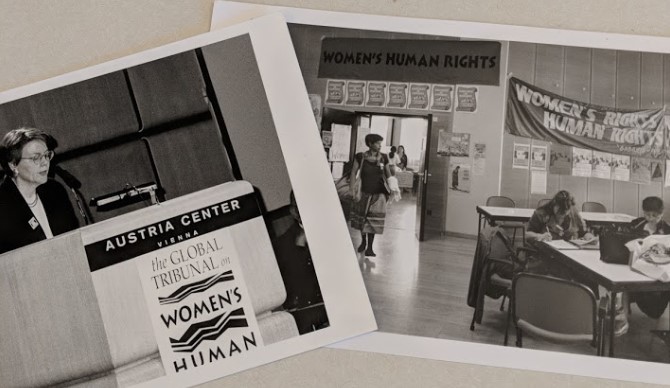 This June 15, 2018 marks the 25th anniversary of a groundbreaking event in international women’s rights activism. Twenty five years ago today, thousands of women descended upon the UN’s World Conference on Human Rights held in Vienna and used that platform to insist that their rights be explicitly named and recognized as an integral and necessary part of international human rights doctrine. No longer content to let the violence, discrimination, and exploitation they suffered daily be relegated to the realm of the private, feminist activists from around the world held a tribunal on June 15, 1993, just one day after the start of the historic UN conference, the second such conference to ever take place.

One by one, women took to the stage and spoke bravely of the violence they have had to face simply because they are women. Some spoke of domestic violence at the hands of partners and husbands, others of rape and sexual assault, child sexual abuse, and even government-sanctioned sexual slavery. The testimonies were moving and powerful, and ultimately led to the official recognition of women’s rights as human rights.

The tribunal took many months of preparation, and CWGL is proud to have been an organizer of this watershed moment, which in many ways is a testament to the power of global women’s activism. On June 25 we will be launching a project that we are really excited about that  pays tribute to this amazing feminist history,  which will also feature a series of short reflections on the tribunal written by some of its most  prominent organizers. Follow CWGL on Facebook and Twitter, and keep an eye out for the #globalfeministjourneys hashtag for updates in  the meantime!